WebSocket, introduced of as part of HTML5, defines a full-duplex single socket connection over which messages can be sent between client and server.

WebSocket is not just another enhancement to HTTP. The WebSocket standard simplifies much of the complexity around bi-directional web communication and connection management.

While the client side coding is fairly straight forward, implementing WebSockets on some development platforms involves writing a large amount of code just to provide basic functionality. A lot of the functionality could and should be provided by the framework, leaving you to focus on your application.

There are several WebSocket server implementations. Here are are few that may help meet your needs.

Microsoft has implemented WebSocket on different places in Windows 8 and .NET 4.5 Stack. These include an implementation for WCF and one for ASP.NET and another with SignalR.

And I’ll implement the echo service that will work with the client in my previous post using Microsoft.WebSockets.

The following chart shows how various ways your software can work with the Microsoft stack. Microsoft’s native WebSocket support begins with .NET 4.5 and IIS 8 which requires either Windows 8 and Windows 2012.

If you want support for earlier operating systems, you’ll want to use a library such as:

(You might want to use SignalR for other reasons, such as automatic support for long polling if the browser does not support WebSocket.)

Microsoft has built abstraction in the System.Net.WebSockets namespace on top of System.Net.HttpListener and IIS 8.0 WebSocket Protocol.

Underneath it all is HTTP listener, which is part of the networking subsystem of Windows operating systems. HTTP listeneris implemented as a kernel-mode device driver called http.sys (Hypertest Transfer Protocol Stack).

You will probably want to build out your WebSocket server application at a higher level than System.Net.WebSockets.

The web socket handler in the ASP.NET stack is a concrete implementation of abstract class Microsoft.WebSockets.WebSocketHandler, which I will demonstrate in a following section.

WCF services and clients can use the NetHttpBinding binding to communicate over WebSockets.

WebSockets will be used when the NetHttpBinding determines the service contract defines a callback contract.

For more information on how to implement a WCF service and client that uses the NetHttpBinding to communicate over WebSocket, see:

How to Implement WebSocket Server in ASP.NET

This section show how you can implement a WebSocket in an ASP.NET application. We’ll do in four steps:

Before you start you need to enable WebSocket Protocol at the machine. 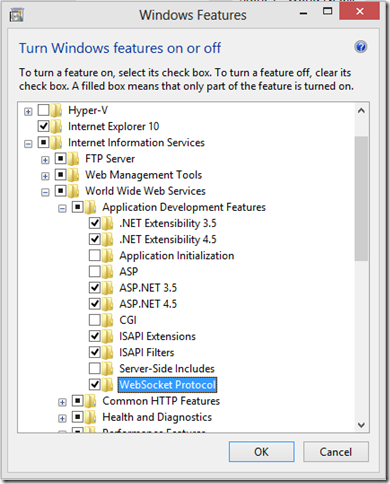 Windows 8 and Windows Server 2012 include the .NET Framework 4.5, so you do not have to install it separately on those operating systems.

Use Run As Administrator to start Visual Studio 2012.

Set your app to run on your IIS server. Right click MyWebSocket project, click Properties. Select Web in the menu on the left, scroll to the Server section. Select Use Local IIS Web server, clear Use IIS Express checkbox.

Add an HTML Page to the project named index.html. Replace the text with the following code (that was slightly adapted from my previous blog post.)

I have changed the end-point URI for the WebSocket to call. The code dynamically configures the code to point to my WebSocket server, even when it uses various ports during your development.

Add a Generic Handler to the project named ws.ashx. To do this, right-click your project, click Add | Add New Item… to see the Add New Item dialog. Next type generic in Search Installed Templates box.

Replace the text with the following code. We’ll implement MyWebSocketHandler in the next section.

Wherever there is an access within ASP.NET application to HttpContext instance, you can check if the request is of WebSocket -type:

WebSocket is TCP based network stream which is different from common HTTP request which can be cached by HttpContext.

Before WebSocket communication is started it has to be initiated. Because WebSocket protocol is an upgrade to HTTP, the spec requires using of HTTP to initiate WebSocket protocol.
Exactly this HTTP request is defined as WebSocketRequest. After successful completion of this request, WebSocket full-duplex is established.

Finally, write a class that handles our business logic in our WebSocket connection. Add a new class to the project named MyWebSocketHandler.

Replace the class with the following code:

Communicate with Your Client In Your WebSocket Handler

I derive my class from Microsoft.Web.WebSockets.WebSocketHandler and then override one or more of the virtual methods:

You add functionality to your handlers by overriding the virtual methods.

You can also communicate directly with the client.

The architecture of Web Sockets in ASP.NET provides one WebSocketHandler instance per client. For example, if you implement the browser-multiplayer-game every player will get its own WebSocketHander instance.

This means you can communicate with each individual member.

You can also maintain a list of clients using Microsoft.Web.WebSockets.WebSocketCollection class.

For example, if you included a user name in the WebSocket’s initial query string, you can maintain a list of clients and Broadcast to the entire collection:

Alternative Way to Initialize Your Handler

Or you could initialize your handler with information from the context provided in the ProcessRequest method your http handler. For example

and then in YourWebSocketHandlerImplementation class, you can get the username passed in as the argument to the constructor.

Run your app. When you make changes, you may need to restart your project. 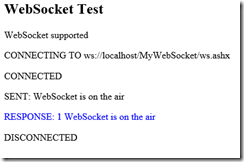 Special thanks to Alex MacKey for his article Websockets with ASP.net 4.5 and Visual Studio 2012 where you can also find Q&A about how to help debug common developer issues in building your first WebSocket app.