This post begins a series on how you can write better JavaScript.

The purpose of this series is take your knowledge to the next level, for you to add skills that will help you build commercial-quality code.

JavaScript objects were introduced in the ECMAScript 5 specification.

You should already know how the basics of JavaScript. For example, how to write statements, blocks, comments, declare and assign variables, write if then else, put up alerts, call a function, create a function, for loops, while loops, do loops, connect up a onclick and onmouseover events to HTML, implement try catch, and setTimeOuts.

JavaScript is objects. Everything is an object: strings, numbers, arrays, functions.You can think of a JavaScript object as a special kind of data – one that includes properties and methods.

JavaScript objects are defined in the ECMAScript standard specification, which is supported in modern browsers.

ECMAScript does not use classes such as those in C++, Smalltalk, or Java. Instead you can create objects several ways including via a literal notation or via constructors which create objects.

Any value in JavaScript that is not a string, a number, true, false, null, or undefined is an object.

An object is a container for a bunch of values and methods.

A property is a name and value.

Let’s look at a sample object. 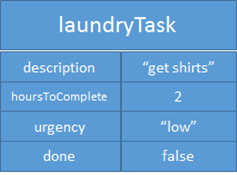 You initialize all or part of any object by assigning initial values to their properties.

An alternative syntax can also initialize an object using object literals. For example:

More on literals in a following section.

You can also create an object using this syntax:

You can have a getter and setter functions.

I will want to be able to get the value of a task programmatically. Methods are properties that contain a function() object, whose intent is to operate on the object.

In the example, we can add a getUrgency() method that will retrieve the urgency of the task object.

There are several ways to create object in JavaScript:

For our tasks, we might want to create code with a bigger idea than just laundryTask. We might be able to use the same code for a more generalized Task object by using a constructor.

A constructor prepares the new object for use, often accepting parameters that the constructor uses to set member variables required for the object to reach a valid state. It is called a constructor because it constructs the values of data members of the class.

We can create Task objects now, just as we do with String objects.

The Task() constructor constructed laundryTask but can be used as a powerful, centrally defined object factory to be used for creating more Task() objects. As you craft your own constructors for producing custom objects you build up prototypes and the ability to inherit behaviors in your Task() instances.

Once you have a object constructor, you can create new instances of the object, like this:

When you use the new keyword, JavaScript treats the function as special by setting the value of this for the function to the new object that is being constructed.

The new object that is returned from the function is an instance of the constructor function that constructs it.

Each constructor is a function that has a property named ― prototype that is used to implement prototype-based inheritance and shared properties. More on prototypes in the next post in this series.

creates a new Date object. Invoking a constructor without using new has consequences that depend on the constructor. For example, Date() produces a string representation of the current date and time rather than an object.

An object literal is an expression that creates and initializes a new and distinct object each time it is evaluated.

Literals let you build objects “on the fly”. Object literals are used to encapsulate data, enclosing your data into a single object to minimize the use of global variables.

Literal can contain arrays or arbitrary JavaScript expressions or values.

When you use literals, you do not need to invoke constructors directly or maintain the correct order of arguments, instead you specify them.

Object literals are also useful for unobtrusive event handling, as a way of holding data that would otherwise have been passed to functions called from HTML event handler attributes.

Here are some examples of literals in action:

JavaScript comes with a set of native objects. Here are a list of some with some comments:

And they come with their own set of functions that make JavaScript rich. For example, you can use built in functions on the Array() object. If you have an array:

You can then use methods and properties on the array object. For example:

Each property also has additional descriptors that can be applied:

To change the default property attributes, use the Object.defineProperty() method. It accepts three arguments: the object, the name of the property, and a descriptor.

In this example, we defined a bruce object that did not have any properties. Then added the name property that is read-only. In strict mode, an error is thrown if you try to change bruce.name.

You can get information about the property descriptors too.

The first syntax, using the dot and an identifier, is like the syntax used to access a static field of a struct or object in C or Java. The second syntax, using square brackets and a string, looks like array access, but to an array indexed by strings rather than by numbers. This kind of array is known as an associative array (or hash or map or dictionary).

These are the same:

You can loop through the properties in an object. For example:

And you can delete properties.

When creating custom constructor functions intended to be used with the new operator, it’s best practice to make the first character of the constructor name uppercase: Task() rather than        task().

Is JavaScript a pass-by-reference or pass-by-value language?